To enable, please find instructions at enable-javascript.com, or ask your network administrator. 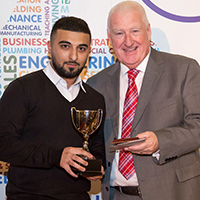 Zishaan Ali, who started his James Briggs career as an apprentice, is celebrating a personal award with the Oldham-based chemical manufacturer after being named Advanced Apprentice of the Year by Rochdale Training Association.

Awarded a trophy and plaque by former Lord Mayor of Manchester Paul Murphy OBE, Zish celebrated with fellow staff at an event held at Rochdale Town Hall, after outperforming many other outstanding nominees within the Advanced Apprentice category.

Zishaan, better known as Zish amongst the James Briggs family, joined as a Customer Service Apprentice in September 2014, spending 10 months in the role before moving up to the Marketing Department in late 2015. Having completed his apprenticeship, James Briggs was thrilled to offer Zish, now 22, a permanent position as Marketing Assistant, promoting him to Pricing Co-Ordinator earlier this year.

Speaking after the event, James Briggs’ Marketing Manager Juliette Mullineux, said: “We are incredibly proud of Zish, who has demonstrated real professional and personal growth in the two years we’ve been lucky to work with him. At James Briggs, we’re committed to upskilling and developing young people, so it’s heartening to see Zish celebrated for his contribution to the company. He’s been an absolute asset to the Marketing Department and truly deserves this award.”